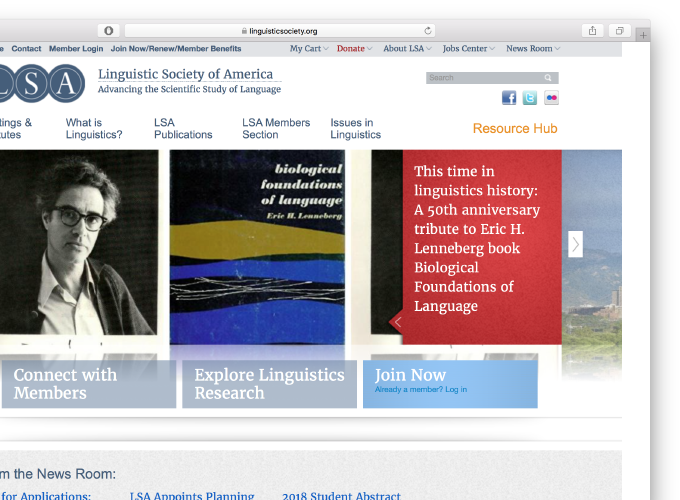 “The study of language is pertinent to many fields of inquiry,”

reads the first sentence of the preface to Biological Foundations of Language. Linguistics, as the scientific study of language, can indeed be approached from a myriad of different perspectives and in cooperation with researchers from a variety of disciplines, ranging from the humanities to the social and natural sciences. This month’s feature on the history of linguistics seeks to bring to mind again a true classic of interdisciplinary studies in language, Eric Lenneberg’s book entitled Biological Foundations of Language, which was first published in 1967—exactly 50 years ago. As of today, Lenneberg’s book is widely considered to be one of the founding documents of the biological approach towards the study of the human language capacity, a (sub-)field that is now frequently referred to as biolinguistics.

Eric Heinz Lenneberg was born in Germany in 1921 and went to grammar school in Düsseldorf before his family, being Jewish, had to flee from the Nazis to Brazil. Lenneberg lived in Brazil until 1945, at which point he left for the United States in order to study at the University of Chicago. After obtaining his bachelor’s degree, Lenneberg continued his university education by studying linguistics and, in 1956, received his Ph.D. in linguistics and psychology from Harvard. However, Lenneberg was not done yet and went on to study neuroscience at Harvard Medical School. This sketch of his education already indicates why Eric Lenneberg was probably uniquely suited to co-found what would later become biolinguistics together with two other young students who were at Harvard at the same time, the graduate student Morris Halle and the even younger Harvard junior fellow Noam Chomsky.

Generally speaking, the scope and depth of Lenneberg’s Biological Foundations of Language is intimidating, even upon rereading 50 years after it was first published: In chapter after chapter, the contemporary reader will find ideas that they might think of as particularly “modern” or “new” already discussed in varying depth but always with persuasive clarity. For example, Lenneberg already outlined the possibility of a genetics of language and entertained a very nuanced view of the language-brain relationship long before any of the multitude of major technological advances in both, genetics and neuroimaging, that we have seen in the past decades were even looming on the horizon. More specifically, he already noted that “speech and language are not confined to the cerebral cortex” and warned us that there is no single brain region to which the language capacity is confined, while there clearly are specific regions and networks that are crucially involved in language processing. Despite this, Biological Foundations of Language was by no means intended to serve as a textbook or survey of the literature at the time; instead Lenneberg’s vision had been to write what he himself called a “theoretical treatise.”

The body of issues in which Lenneberg was interested and on which he would elaborate in his 1967 book is foreshadowed in a vast number of publications preceding Biological Foundations of Language. For example, in Lenneberg (1964) we read that

“the facts presented [in this paper] do not constitute a theory. Let us hope they will lead to one in the future.”

Biological Foundations of Language then was Eric Lenneberg’s attempt to get at least a step closer to such a theory, as is evident from the concluding chapter, in which he provides his attempt at such a biological theory of language. This explains why, in many respects, Lenneberg’s book was a latecomer to the party: Skinner’s take on language had famously been debunked by Chomsky (1959) and many a behavioral psychologist had been “converted” and was already advocating for a more nativist take on the study of language solely on the basis of arguments and analyses stemming from theoretical linguistics. Therefore, Biological Foundations of Language was, at least in part, also supposed

“to provide a palpable biological plausibility for conclusions to which a number of uncomfortable Empiricists […] [had] committed themselves on the basis of formal argument alone” (Bem & Bem, 1968: 498–499).

Fifty years ago, Lenneberg concluded Biological Foundations of Language by saying that

“there are many reasons to believe that the processes [emphasis in original] by which the realized outer structure of a natural language comes about are deeply-rooted, species-specific, innate properties of man’s biological nature.”

Up to this day, we have seen tremendous progress in many areas of biolinguistic inquiry that have essentially corroborated this conclusion, but a true integration of linguistics and (developmental) biology in Lenneberg’s spirit is still pending and can at best be considered an ongoing endeavor. For the most part, the connection between (theoretical) linguistics and biology tends to remain rather indirect, even in an area like neuroscience of language, the currently most promising point of contact with a fair number of new interesting insights stemming from interdisciplinary collaboration (see, e.g., Moro, 2008/2015; Friederici, 2017).

Lenneberg’s foundational book was ground-breaking insofar as he managed to formulate a coherent theory with regard to the biological basis of language for the very first time, thereby, in collaboration with many others, kicking off the development of the entire sub-field of biolinguistics. Clearly, the biological study of the human language capacity has progressed significantly over the past 50 years, so one could now hardly use Biological Foundations of Language for teaching a class on the subject matter. Nevertheless, there can be no doubt that the book is a true classic and as such should be something that we regularly go back to. The 50-year anniversary of its publication provides such an opportunity and the inclined reader will be pleasantly surprised at how accurate Lenneberg’s analyses and predictions still are; even more so, with some minor additions and modifications, the biological theory of language development he put forward remains most accurate to this day.